“One time I asked Abba why is it that some people are honest and true and have integrity but others are not. He said that character is built as you are growing up in your family. I would love to know more about Abba’s early years as he had one of the strongest and truest characters I have ever known.

Abba’s presence was a true, genuine, strong and most powerful witness to God while his keen intellect showed us the way. I keep his picture before me every day as a reminder of the presence and love of God and to remind me to follow his example.

“May the souls of our faithful departed Rest In Peace and may perpetual light shine upon them, oh Lord” Let us pray for him as we know he is praying for us.” Bob Faillace 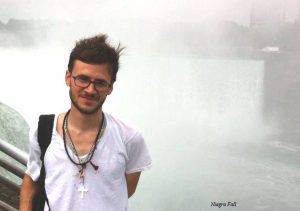 “Father John would share that quarterback story often in his final days. The beauty is that his life is so wonderfully reflected in it. A good quarterback renounces all  distractions in order to train and prepare, that he may better serve his team as a whole; a good abbot does the same, where the team is the monastic community; a good monk does the same, where team is the soul, a good Christian does the same, where the team is the world. To use the analogy more specifically, as a spiritual father and director of souls, Father John knew where the man was going to be. In spite of all obstacles, undistracted and against all odds, Father John would throw the ball ahead of the man and always be able to meet him at that very point. He knew where and how to direct people closer to God, in order that they may share in the faith he so humbly radiates.”