In 1985, as a teenager, Minhhang K. Huynh and her family emigrated to America from Vietnam. After having graduated from the State 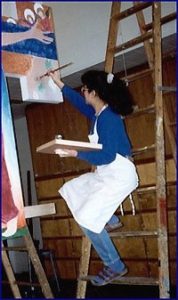 University of New York in Geneseo, Minh’s plan of going to graduate school for architecture drastically changed after her extended stay in Italy. She not only discovered her God-given gift as a painter of sacred art but also experienced God’s special love which manifested the beginning of her conversion to Catholicism and a remarkable spiritual journey with God. The beloved Saints Francis and Clare especially prayed and continue to intercede for her.

Coming back home to Geneseo, as a lost soul, Minh declined the offer of admission to graduate school and started her search for God. She painted a life-sized, 200lb. crucifix and began her public speaking ministry, started at the International Medieval Conference in Kalamazoo, Michigan in 1997. For the next two years, Minh took the Geneseo 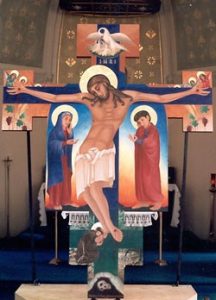 Crucifix (as she named it) to churches in and out of state and spoke about the two-year long process how it was created. The Crucifix journey finally brought her to the Abbey of the Genesee in Piffard, New York where Abbot John Eudes Bamberger recognized God’s working in her and eventually became her spiritual director. Like a sponge, she absorbed almost everything the Reverend Father discussed and taught her about God. She finally joined the R.C.I.A. program and entered the Catholic Church on Easter of 1998. Clare was chosen as her Christian name because of the beloved St. Francis’ influence. Minh means intelligent/bright, and Clare means illustrious/bright.

Like her saints, being misunderstood and without support from her family, she began to embrace a life of poverty, simplicity and humility living as a poor Clare who seeks God in the suffering Jesus. Minh did explore to join different religious orders. However, God has a different plan. Under the sage guidance and teaching of Abbot John Eudes and the influence of the Genesee Abbey brothers’ way of life, after nine years of learning how to live the life filled with graces as much as trials, Minh took her perpetual vow living as a consecrated virgin in the world. Following the pattern established in the primitive Church by the dedicated Christian virgins, Minh lives the life as a lay woman, dedicated to contemplative prayer and service to those in need, especially the elderly and children.  She earns her living by writing icons, selling art reproductions and working at Duplicating Center of Geneseo college. 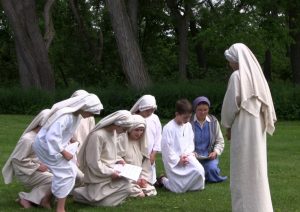 When there is a special call, Minh travels and shares passionately her everyday unique experiences of God and urges people not to take theirs for granted. She has gone to parishes, retreat centers, universities, seminaries, monasteries and convents located in various States. People of all ages are encouraged to assist one another in their search for God, especially children who are dearly loved by the Blessed Mother whom, in faith, Minh has grown to know and love. 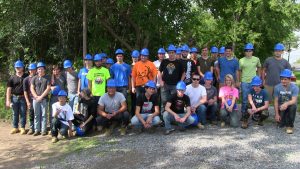 In 2014, as she worked with 72 homeschooled children (They learned and performed the Annunciation Musical which Minh was inspired to compose and direct), Minh’s desire of finding a piece of land to build a Marian House so children can be brought to Our Lady became ever more intense. It was God’s time! Minh made a great act of faith and purchased a piece of wooded and untouched virgin land filled with poison ivy and infested with mosquitoes. “The Grotto was worse. Our Lady will help me”, in faith, Minh prayed with confidence and hope. Without enough funding and physical strength, the task seemed impossible, but not for God. After about eight months of her clearing the land using only two hand saws and receiving some help from kindest strangers with bigger trees, God was gloried for He miraculously fulfilled the dream through Minh’s faith “as a mustard seed”. The long-awaited vision and two years of considerable suffering finally gave birth to a beautiful House for the Mother of God. The beloved Abba did the honor of blessing and dedicating it to Our Lady on her Assumption feast, 2017. With the help of the Genesee Valley BOCES Building Trades (one teacher aide, three teachers and sixty-five high school students), throughout the nine months, Minh watched, learned and physically helped build the House. She received an honorary certificate from the school, and now is a proud carpenter of the dear St. Joseph! 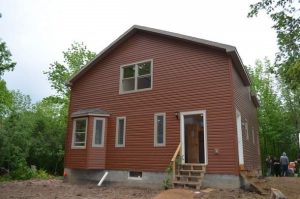 “The Blessed Mother takes my offering seriously and seems to like Her house!”, Minh wrote to the spiritual father. As the caretaker of the House, she prayed in the Chapel, wrote icons and pleaded for those who seek consolation from the Mother of 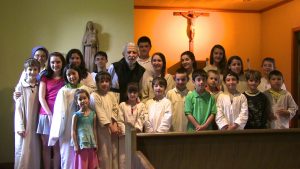 God: “I ardently desire that a temple be built for me here, where I can show and offer all my love, compassion, help and protection, for I am your merciful mother. Here I wish to hear and help you, and all who dwell in this land and all those others who love me, and invoke and place their confidence in me; and to hear your complaints and remedy all your sorrows, hardships, and suffering.”  O.L. of Guadalupe

As Minh looked forward to doing ministry with children. Her path following God, however, took a sharp turn. She was asked to help out at the Abbey new store as its manager for more than two years until the pandemic hit. It was a successful endeavor which

Minh gained the experience of a lifetime. For over 5 years, after successfully building the Marian House and running the Abbey religious gift-shop, she is now back living the contemplative life in the Marian House as she mourns the passing of her beloved spiritual father of almost 24 years. “I must carry on his legacy. May the Reverend Father of many rest in peace. I am inspired. Therefore, I desire, but only doing the will of God gives me much peace and joy for I serve Him, the Giver of all gifts, the God of my spiritual father”

She asks for your prayer, and thanks all whom God sent to help. She prays that God’s gifts to the Church through her sharing “A Soul’s Journey with God” story and her “praising-with-color” sacred images will help enkindle, strengthen, color and open your spirit to the Heavenly Father’s love in a special way.  Amen.